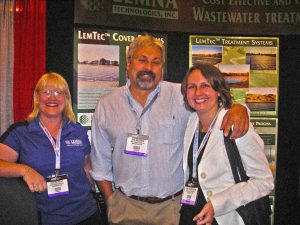 WEFTEC, known as “The Water Quality Event”, has grown to become the largest and best attended annual water quality conference and exhibition in the world. Attended by over 18,000 people, with more than 975 exhibiting companies occupying more than 293,000 square feet of exhibition space, WEFTEC 2010 offered an unparalleled opportunity to view the latest technologies and services for water environment preservation, restoration, and sustainability. The world’s leading experts in these technologies met at WEFTEC to network, to exchange ideas and to present their environmental technologies and services.

On the trade floor of WEFTEC Agnes met with a Polish delegation of Polish municipality representatives and CEOs of major private Polish environmental firms who came to the U.S. to look for partnerships, and to introduce their technologies to the U.S. market. One of the Polish companies that Agnes met at WEFTEC became GGC’s client.