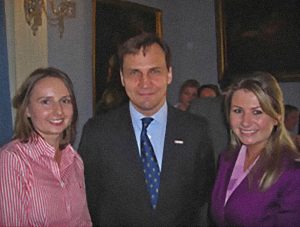 On November 1-4, the Minister of Foreign Affairs of the Republic of Poland, Radoslaw Sikorski, paid a working visit to the United States to continue dialog with the U.S. administration on Polish-U.S. relations, including security cooperation.

The program included a meeting with Secretary of State Hillary Clinton, during which bilateral strategic dialog was officially resumed. Meetings with other members of the U.S. government and Senate Foreign Relations Committee Chairman John Kerry also took place.

Other highlights of Sikorski’s visit included conferences in Washington, DC at the Brookings Institution, the World Bank and the Center for Strategic and International Studies. During those meetings Sikorski presented Poland as an important U.S. partner and a European Union member who has achieved impressive economic progress and success in countering the global crisis.