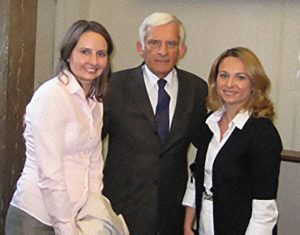 Agnes and Eva met with the European Parliament President, Jerzy Buzek, during his visit to Washington, DC to lead a dialog on transatlantic relations.

On April 26-29, European Parliament President, Jerzy Buzek, paid a working visit to Washington, DC to meet with US administration officials including Vice-President Biden, Secretary of State Clinton and Speaker Pelosi. President Buzek also traveled to New York for meetings at the United Nations, including a meeting with UN Secretary-General Ban Ki-moon.

President Buzek commented: “We have many ideas for deepening our relations. The main purpose of the office is to build a much closer partnership between the European Parliament and Congress as the European Parliament is more powerful after the entry into force of the Lisbon Treaty. The EU and the US need to be more coherent and well informed on legislation and political activity. If we work together in advance of legislation we can improve the outcome for citizens and business in a huge transatlantic market. Together, we must face the challenges that confront us across the Atlantic, from climate change to energy security, from maintaining free trade to improving global governance.”

As a results of Buzek’s meetings on Capitol Hill, the US Congress, Speaker Polosi, committed to open a similar initiative, a US Congressional Office in Brussels, Belgium.